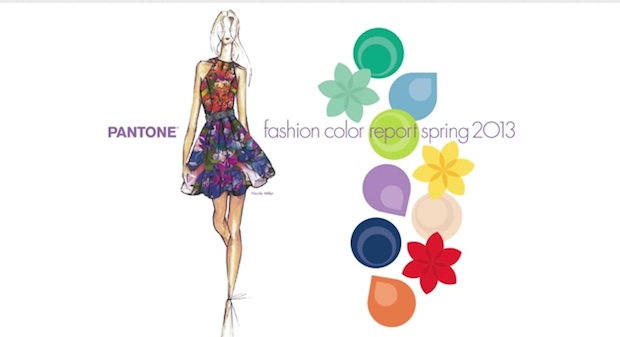 Fashion Week has come & gone in New York, and during the event, the world’s leading clothing designers are showed off creations that will be in stores soon. While the runway presentations might seem removed from the “real world,” trends that are established during Fashion Week tend to influence designers in other realms, from the graphic furniture to the automotive to the tech industries.

The report surveyed the most prominent colors used in the Spring 2013 collections (the fashion world shows off clothes one season in advance on the runways). Pantone’s analysts also identified what narrative the popular colors suggest. In a way, the color spectrum presented in the report also reflects what designers believe consumers are looking for, in terms of products that can address their current mood and desires. The report states that the most popular colors for Spring 2013 offer “a palette that that mixes dynamic brights with novel neutrals to create a harmonious balance. This allows for unique combinations that offer practicality and versatility, but at the same time, demand attention and earn an appreciative glance.” In a time of ongoing economic uncertainty, the notion that consumers are seeking a sense of comforting harmony blended with functionality seems about right.

For Spring 2013, Pantone has identified green as a dominant shade especially in the women’s collections, from a bright yellow-green hue (that Pantone classifies as Tender Shoots, to a subdued pale green classified as Grayed Jade, to Emerald, a bright jewel tone. Interestingly, the report and the designer commentaries do not associate “green” with sustainability as the 2010s are underway, staying away from perhaps the most obvious symbolic use of the color in the 2000s. Instead, they collectively seem to imply that green conveys a sense of freshness, vitality, and simply is pretty.

Other colors that were used often in Fashion Week presentations–and are likely to surface in other products later in 2013–include a lovely, soft yet vibrant purple called African Violet; a super bright, cheery Poppy Red; the coral-tinged, fruity Nectarine; a nearly neutral and toned down Dusk Blue, an alternative to more traditional neutrals such as tan; and a just-slightly-brighter-than-navy Monaco Blue; and the greenish yellow, Lemon Zest.